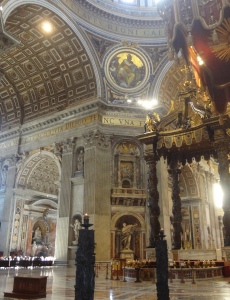 In Paul’s epistle to the Romans, he calls upon Jew and Gentile alike to embrace Jesus Christ as Lord. He challenges them further to embrace the teachings of the gospels and to disavow a strict adherence to the old laws proscribed by Moses and the Old Testament prophets. His tone does not chastise from the high-minded perch of the pulpit. Instead, he shows them his own human failings so that they understand his message as universal, one intended for all men. He too, is impaled by the sins of the flesh, and only through God’s forgiveness does he gain salvation. He writes, “O wretched man that I am! Who shall deliver me from the body of this death?”

As I reflect on the year that has passed since your death, I find myself in Rome reading Paul’s words and remembering you. It has been a trying year. A friend was buried yesterday, and the black body has continued to be marred by death and destruction. In your time, you witnessed your fair share of the white man’s wrath, and his racist predilections haven’t abated. Just days before your death, you saw Michael Brown lying prostrate in the street for hours after he was struck down by an unrepentant cop. And the slaughter has continued. Tamir Rice, a twelve year-old, was slain for playing with a toy gun in a playground. There was no warning, only shots. Eric Garner was strangled to death on a busy Staten Island street corner. Walter Scott was shot in the back by a police officer as he ran through an open field, treated like one of those target practice silhouettes. Freddie Gray had his back broken for running away from the police. Sandra Bland was found dead in her cell after refusing to extinguish a cigarette. Samuel Dubose was shot in the face during an unwarranted traffic stop. Nine parishioners were killed in an AME church, including Clementa Pickney, an elected official and man of unquestioned faith and considerable promise. Kalif Browder’s death shook me the most. He was a young man who was wrongfully jailed for three years and who upon release was showered with attention from celebrities and concerned citizens in the hope that he would be able rise above his trauma, but he killed himself because the pain was too much. He could have been one of my students, anyone of the young men and women who are ensnared in criminal justice system. This year confirmed that death is all around us. END_OF_DOCUMENT_TOKEN_TO_BE_REPLACED