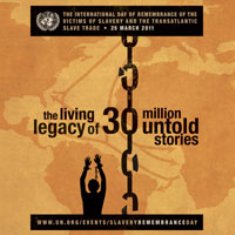 At the United Nations Conference for the International Day of Remembrance of the Victims of Slavery and the Transatlantic Slave Trade, guest speaker Sir Hilary Beckles, Pro-Vice Chancellor and Principal of the University of West Indies, made a bold assessment of the future: if the 20th century was one of revolution and civil rights, then the 21st century should be the century of reparations.

So what gives? Shouldn’t I get a check if it’s clear that I can document who sold me, from where, for how much, and to whom? Not exactly. The root of reparation is repair, and repair can and should come in many ways. Sir Hilary Beckles believes it should come in the form of education.  He challenged the audience to unearth these documents, educators and students alike, those present, and those listening via videoconference from Columbia, Portugal, Gambia, Trinidad and Tobago, the United Kingdom, and the United States. Evidence is there, but more scholarship and awareness is needed.

Author of ten academic books focusing on slavery and his native country Barbados and member of the International Task Force for the UNESCO Slave Route Project, Beckles certainly has an informed opinion of the case for and against reparations. He explained the three widely held arguments that reject reparations: first, the practice of slavery did not commit crimes against humanity because enslaved Africans were not human, thus rendering the trafficking legal according to the statutes of the offending countries; second, slavery happened centuries ago and society has since moved on; and last, the enormity of the crimes makes it impossible to quantify and account for.

He countered each: because the laws that questioned the African’s humanity were ridiculous and have rightfully been rescinded, so to can the impunity that these countries maintain. Further, how can slavery have happened too long ago if the living memory of its existence speaks to its presence? And finally, he offered a study that probed the profits of the London financiers. If Britain, which profited the most from the Transatlantic Slave Trade, “paid the three million Africans it enslaved a simple wage plus trauma, the amount would equal 7 trillion pounds, twice the debt of its GDP.” Slavery was big business, and because these institutions were savvy, they documented their profit-loss margins, inventories, slave routes, traders, etc. This is where education is key because many of these documents still exist.

As I listened to Beckles’ call to action, I thought about my role, the role of the woman who sat next to me, and the role of the man who sat behind me. I help formerly incarcerated youth further their education. She is the offspring of the wealthiest slave-trading family in America. He is a principal of a school in the Ivory Coast. I felt the pain of my illiterate grandfathers and their grandfathers who were slaves. I felt the guilt in her voice when she offered to engage interested parties. I felt the shame of his students who find it difficult to embrace the African’s role in the slave trade.

The Transatlantic Slave Trade produced many victims, those who live in the industrialized world and those who don’t, those who were sold and those who profited.  So writing a check to my black students who are subjected to de facto slavery via the prison industrial complex, or seizing the assets of the heads the multinational corporations of the world, the beneficiaries of their ancestors slave-trading wealth, or jailing the descendants of African slave traders who are grappling with political unrest would only serve to transfer the injustice that occurred when the first African was captured and sold.

These initial injustices need repair, and no dollar amount can mitigate them. The way to the future has to follow the example observed by one of the greatest voices of the abolitionist movement.  Upon learning of his master’s desire to get keep him uneducated, Frederick Douglass realized that it wasn’t money or violence that would liberate him; the knowledge he gained from books was the source. Today, we are “free” and the books aren’t hidden. The problem, however, is that the books are filled with half-truths that tell us that enslaved Africans were kidnapped by Europeans, that their Latin American descendants only live in Brazil, that slavery ended with the American Civil War.

This was written after I attended the Internationational Day of Remembrance of the Victims of Slavery and the Transatlantic Slave Trade Global Videoconference for Educators on March 23, 2011 at the United Nations.  More information about the conference can be viewed here.